Until 1894, the German Catholics in McHenry were dependent upon the parish at Johnsburg for services in their own language. German missionaries on their way to the church of St. John the Baptist in Johnsburg would stop in McHenry to care for the Germans there. During the time of Fr. Hubert M. Fegers, who came to Johnsburg in 1868, the German community here was considered a mission of the parish.

In 1894, Fr. Frederick J. Kirsch (1894-1901), a German speaking priest, was appointed the first resident pastor of St. Mary Parish, McHenry. He offered the first Mass at St. Mary’s on August 15, 1894, in a building which had been used as a public school. Soon after Fr. Kirsch’s arrival, he made plans to build the present St. Mary Church. Dedication of the church took place on the Feast of the Assumption, August 15, 1898, just four years from the date of the first Mass celebrated by Fr. Kirsch.

After a suitable place of worship was built, priority was placed on a parish school. Classes could be conducted in the old school building. Atmosphere was not esential, learning was.

The School Sisters of St. Francis operated the district school in Johnsburg and their services were requested for McHenry. They continued to administer the educational program through the years, but left the parish in the early 2000’s.

During the pastorate of Fr. Edward Berthold (1915-1921), tragedy struck the parish in 1917 when fire heavily damaged the church and destroyed the rectory. The church was repaired, but the parish got along without a rectory until Fr. Charles S. Nix (1921-1960) became pastor on August 10, 1921, the first day of what was to become 39 years of service to the parish.

Fr. Nix, who was named a Monsignor in 1935, supervised the immediate construction of a new rectory. In 1937, Msgr. Nix built a new school building, which was to serve as a community school for the children of St. Mary and St. Patrick parishes until 1951 when the people of St. Patrick’s built their own school. Bishop Edward F. Hoban dedicated the new school on November 7, 1937. In 1956, Msgr. Nix added four classrooms and a gymnasium to the growing parish school.

For at least 30 years, the parish enjoyed the services of Benedictines from Marmion Abbey for much needed assistance on weekends, holy days and at the holiday seasons.

St. Mary Parish celebrated its diamond jubilee of the founding of the parish during Masses of Thanksgiving on Sunday, September 21, 1969. The pastor, Fr. Baumhofer, also celebrated 25 years in the priesthood on that day. To mark the jubilee, extensive renovation of the church and the St. Mary Chapel (the church basement) was carried out.

The rectory was refurbished and plans were made for the conversion of St. Mary Chapel to St. Mary Family Hall in 1993 under the pastorate of Fr. Thomas E. Burr (1991-2006). 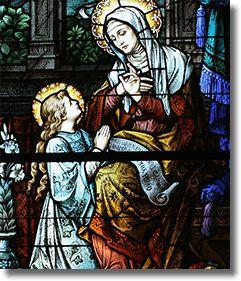